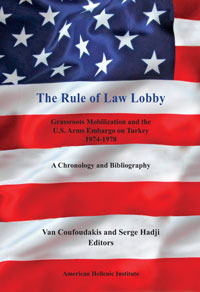 The Rule of Law Lobby: Grassroots Mobilization and the U.S. Arms Embargo on Turkey - 1974-1978

The mobilization events highlighted in the annotated Chronology record how Greek Americans reacted to the invasion of the Republic of Cyprus by Turkey in 1974. In addition to protesting vociferously and providing humanitarian assistance, the Greek American Community gradually coalesced into a lobby under the newly unfurled banner of the “Rule of Law.” This led to the remarkable accomplishment of cutting off military aid to Turkey under an Arms Embargo imposed by the US Congress.

The annotated Chronology summarizes the activities of the “Rule of Law” lobby from its genesis in 1974 following the Turkish invasion to the lifting of the Arms Embargo on Turkey late in 1978. The chronicle is based primarily on political reporting – all from public sources – on the ongoing developments, and contemporaneous illustrations. A brief annotated Bibliography supplements the historical record.